When playing or at least watching many games of a person/producer, details are often already noticeable. Like Capcom’s beat ’em ups on the SNES have a 3 opponent limit at a time, Makoto Uchida’s games have a strong Hollywood influence, or Dennis Ferreira’s games are an absolute disaster.

Among the games with common elements, I could mention the games from Juliano Lima, a Brazilian developer.

Though they often belong to different genres, you’ll find commonalities that you’ll be sure of, even if you don’t know they came from the same person. And one of their latest games, Barry the Bunny, has finally hit consoles.

Is he worth it?

The construction rabbit versus the jumpsuit gang

Barry is a rabbit who for some reason builds bridges to help others get home.

But your work is hampered by Empresa do Overalls (since the game has Portuguese language I use the terms there), a bunch of animals that wear clothes and are 16 times bigger than you and whose job is to destroy bridges.

READ – Capcom Beat ’em Up Bundle | Revival of the classics

It’s now up to Barry to rebuild the bridges, save the rabbits and stop the Overalls Company/Gang, but his work will be long.

Obviously, just like Juliano’s other games, the script is just an excuse for you to play the game, and that’s enough in an arcade-style game. I often prefer that to the game that says nothing. 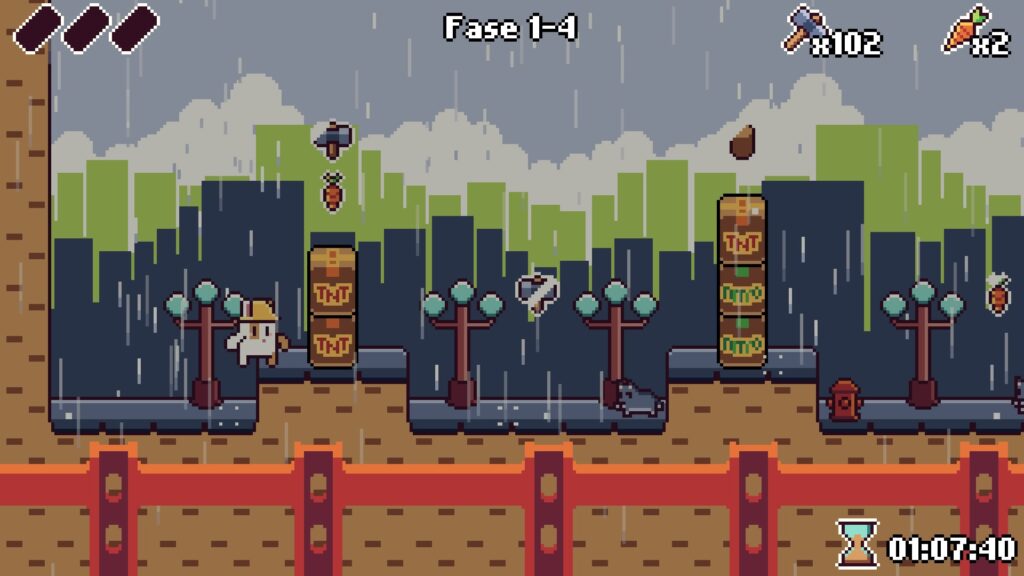 Barry the Bunny is a simple side scroller. Go from point A to point B avoiding obstacles. At first the game starts out easy, but over time new things are added that make the game more challenging, from falling platforms to crates that are very reminiscent of Nitro and TNT crates from the Crash Bandicoot series.

But the challenge is not necessarily difficult. Of course, later stages get more challenging, that’s the idea of ​​progression, but nothing that makes you want to throw the controller at the wall.

The final boss fight is the most difficult, but a few attempts, precise jumps and a bit of luck will help you master it.

The game has 96 levels and 4 bosses, the levels go from point A to point B, and there are obstacles and enemies to overcome. Enemies can be defeated with hatchets that you collect during stages.

Also, in each level you can collect 3 logs to build bridges. It’s not necessary to complete the game, but it’s a good extra challenge and unlocks the best ending to the game.

After every 24 levels you’ll face a boss… Which isn’t exactly a fight, basically you have to go through an obstacle course until you reach a point where the boss falls into the lava (quite Super Mario Bros style), and Although gradually you will become more demanding.

One of the game’s best tricks is not showing the character’s health bar, at least not in the traditional way.

The better the character is dressed (with a helmet, body armor and sunglasses), the more health points he has, and the way to restore them can be with the healing items found in the levels or by collecting enough carrots to get an extra hit score point. And therein lies the only difference in the difficulty selection of the game.

On easy every 25 carrots one life point, on normal a little more, otherwise the difficulty level does not change.

The game isn’t that long, at least my playthrough, saving the 96 bunnies took about an hour and forty five minutes, or at least that was the size of my vod.

A sweet and fun game to listen to 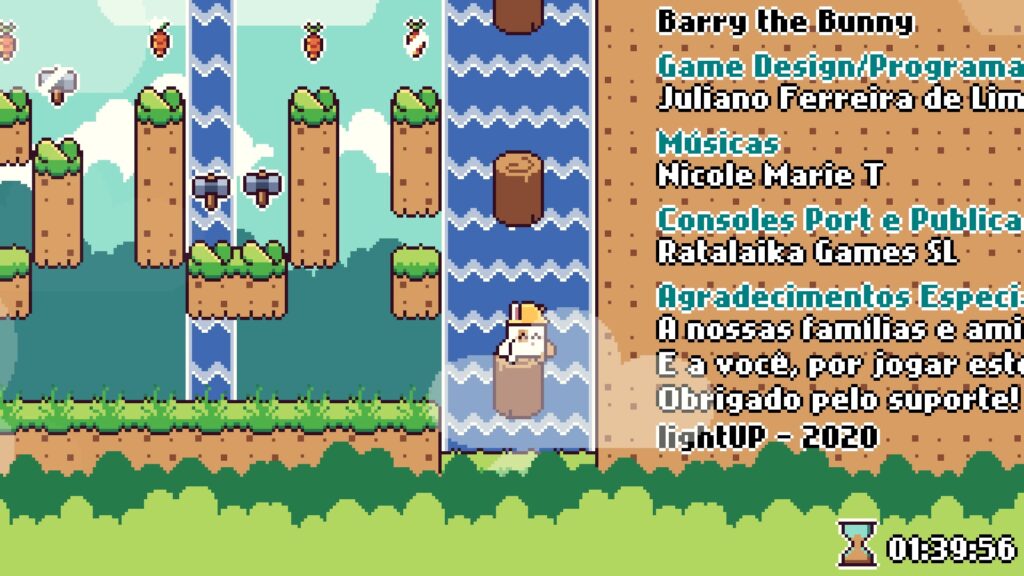 Graphically, Barry the Bunny uses the same structure and style as Juliano’s other games, namely the four different worlds/maps and the sprites, which themselves are small, have personality and a certain charm. And the bosses have giant sprites that add a sense of danger to fighting them.

The scenarios and gameplay elements aren’t very cohesive, although some maps don’t make much sense technically, but that’s just my attempt to stretch the text a bit by being incoherent.

The songs might not be the ones that stick in your head, but they are hot and fulfill the role of packing your journey.

Can I recommend Barry the Bunny? Yes, it’s a short, solid game with few bugs (sometimes collision is questionable on some platforms) and fun. The game is available for Playstation 4, Playstation 5, Nintendo Switch, Xbox One, Xbox Series and PC. 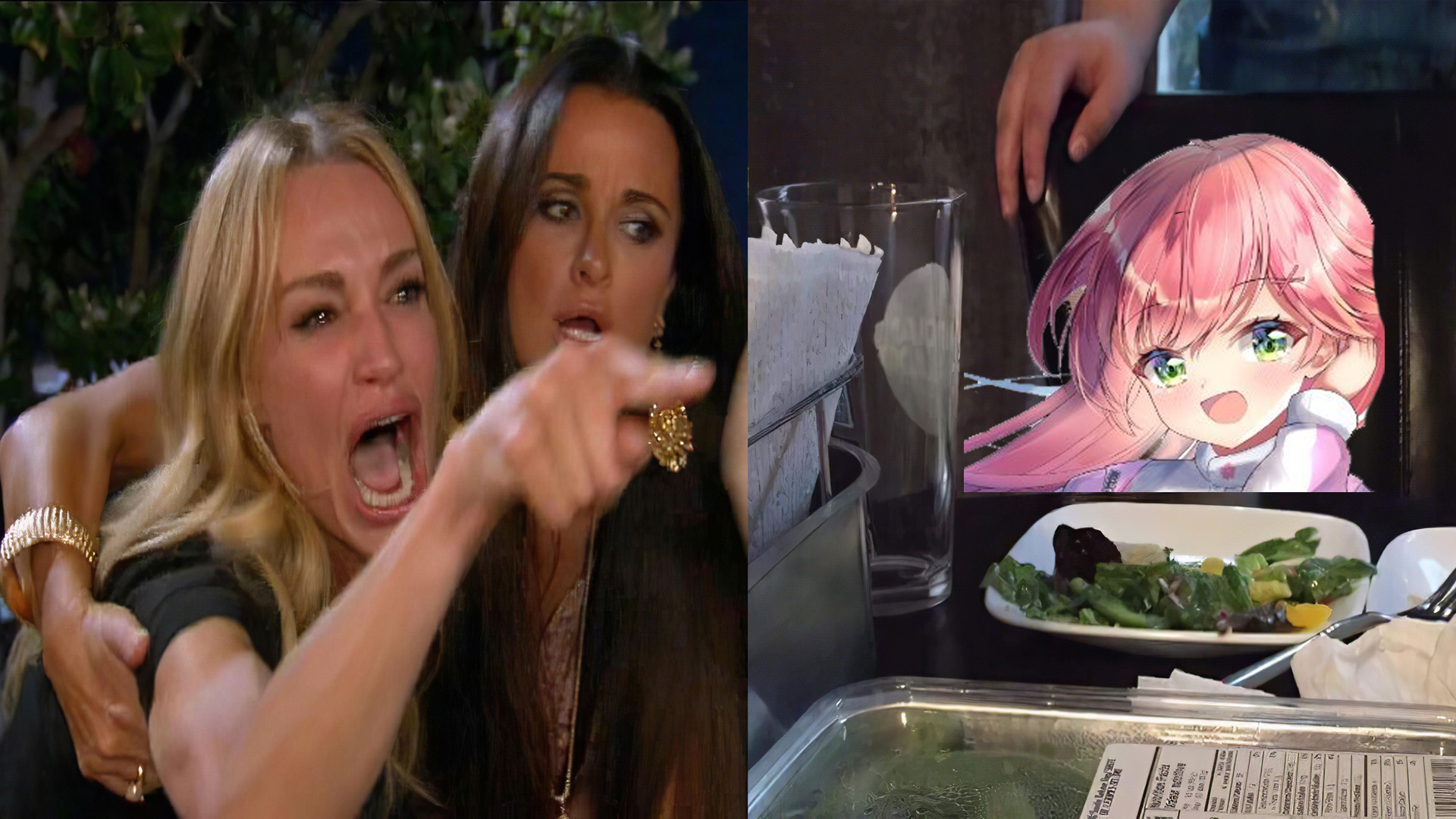 No, “anime avatar” is not an argument